Some people may wonder "Why Fight Like A Girl?" Girls are weak and pathetic, why would I want to fight like a girl?

These people are oh so wrong! Firstly, we ARE girls!! It is not possible for us to fight like men so we will fight like a girl! We don't have the same reach or abilities as men so we need to apply ourselves differently. This is where our motto "with Grit & Grace" applies so well:

Secondly, women may not be as physically strong as men, but we are by no means weak. We are a lot stronger mentally than often given credit for, which gives us a huge advantage.

Your best form of self-defense is to never have to defend yourself in the first place.

Fight Like A Girl is owned and run by two women who are so passionate about EDUCATING and EMPOWERING other women. YOU CAN do something to protect yourself. YOU DO have a CHOICE. You can CHOOSE NOT TO BECOME a victim.

If you find yourself in a situation where you do have to defend yourself, there ARE steps you can take to get out of it. 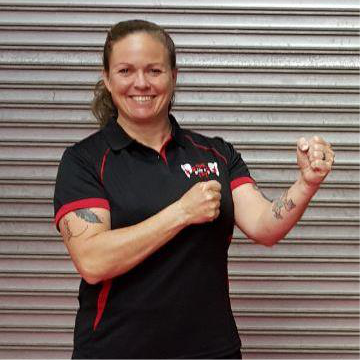 Christine is a Third Dan Black Belt in the Goju Ryu style of karate. She trains under Sensei Ben Marè in Hillcrest, Durban at the Seiwakai Dojo.

Christine has also trained under instructor Tony Hardy in the discipline of Krav Maga.

Christine coached & managed the Seiwakai Karate Team and was an active competitor herself.

In 2014 Christine won gold for kata and kumite at the All Africa Goju Ryu Karate Championship in Johannesburg.

Christine then went on to win Gold in the SA Open Championships for kata and kumite and was awarded her KZN colors in 2015 and 2016. In November 2015 she went to New Zealand and represented South Africa at the World Goju Ryu Championships where she won Gold for kumite and Bronze for kata.

Christine, a chronic asthma sufferer, started karate at the age of 42 and obtained her Black Belt 2 years later. She is passionate about empowering other women to achieve their own goals. She believes that it doesn’t matter what age, race, size, religion or fitness level you are, you can empower yourself to do anything you set your mind to. Christine believes that as women we need to empower each other and be the heroines of our own lives.

Christine and Ann combined their years of martial arts training to create the “Fight like a Girl” self defense course. A course orgianally dedicated to women and taught by women, but has now evolved to include boys as well :) .

Christine is 51 years of age and is married with 2 sons.

Ann decided to give it a try, not really thinking it would go anywhere, but the karate bug big her so hard that 4 years later she earned her black belt in the style of Goju Ryu.

A super geek at heart, Ann is into anything ‘web’ or IT related.

She’s also a consultant for online coaches across the globe, helping them put systems in place to free up their time, allow them to serve more clients & scale their business to 7-figures.

In addition to running her own businesses, working with women & children here at FLAG, she’s also on the board of an NPO called Brighter Future

Ann has 2 amazing children (a teenage daughter and a 10-year-old son) and 2 beautiful furkids. She’s also an avid mountain biker who spends as much time on her bicycle as possible (which of course, is never enough).

Ann has always been passionate about helping others and in particular empowering women to be able to stand up for themselves.

South Africa is a beautiful, amazing country, but the reality is that crime statistics are very high and particularly, crime against women, whether it is being hi-jacked, mugged, raped or even sexual harassment and domestic abuse.

Women need to learn how they can prevent themselves from becoming a victim and helping other women achieve this has been a dream for Ann.

Fight Like A Girl was borne when Ann found out that Christine was also passionate about empowering other women and keen to join forces.

Fight Like A Girl is literally a dream come true! 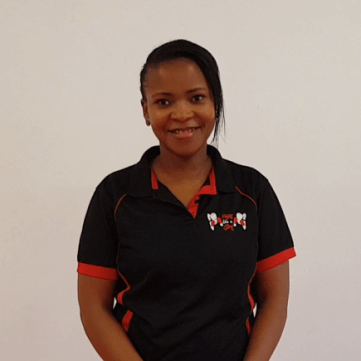 Siphosami is one of our new Fight Like A Girl Instructors, who has a strong passion for young girls and women to be protected from victimization. Siphosami believes that the first phase of empowering young girls and women is knowledge about safety. Raising awareness of the possible dangers women can find themselves in, then teaching these women how they can avoid ever being in these situations is what Fight Like A Girl is all about. Siphosami is also passionate about teaching young girls and women the basic techniques they can use to escape situations of victimization, thus saving more lives and reducing the current statistics of gender-based violence in our country.

Siphosami is a wife and mother of two children who has worked in the medical industry for over 13 years. She also runs her own non-profit organisation called Ubomibami Foundation, which is based in Durban and runs outreach programmes to different communities in and around Durban. Siphosami is excited to be part of this life-saving initiative of Fight Like A Girl.

S’negugu is another one of the new Fight Like a Girl Instructors who is married and blessed with two amazing little girls. Her passion for youth empowerment started in the early 2000’s when she started a non-formal community study group to assist learners during the transition from traditional to outcomes-based education (OBE). She started a support group for young girls at the age of 17 years and became one of the youngest members in a mentorship program - BBBSSA. She is one of the co-founders of a non-profit organization called Ubomibami Foundation, based in Durban, which conducts outreach programmes to different communities in and around Durban.

S'negugu's passion and gift to coordinate fulfilled her dream of touching and changing lives for the better. She strongly believes in the power of planting a seed (idea) and this is what Fight Like a Girl aims to achieve. Teaching basic and easy to remember techniques that can be used naturally, should one find themselves in a compromising position. Empowering young women to be aware of their surroundings, how to protect/defend themselves and to avoid being a victim by knowing what attackers look for.